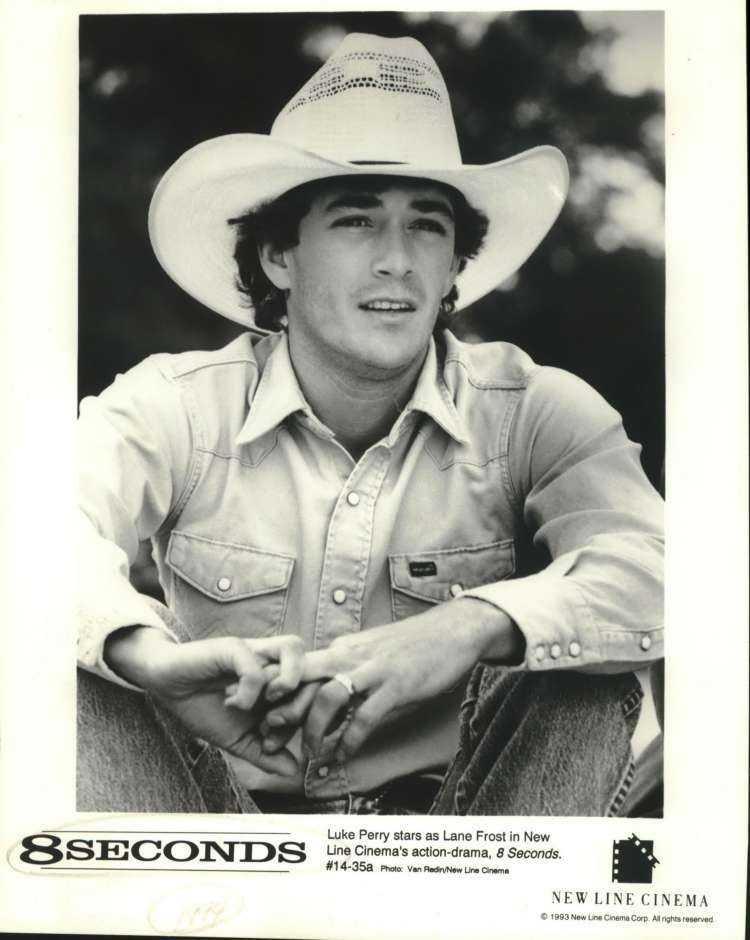 March 12, 2019-Texas-In the early 1990s Luke Perry tackled a film role that would change his live forever-“8 Seconds.” Perry was best known for his portrayal of dreamy, heartthrob Dylan McKay on Beverly Hills 90210. The actor's physical resemblance to the main character, rodeo legend, Lane Frost was uncanny. At the outset, Perry likely had little idea of how big of boots he was attempting to fill in taking on the role of the most beloved bull rider in rodeo history.

The rodeo world was hungry for an authentic film and the moviegoing masses are always looking for a great story. With “8 Seconds” the producers of the film were able to connect with the general public and simultaneously please the members of the rodeo subculture with a product that closely paralleled their world. The film has a lifetime gross of almost $20 million from a budget of $7 million dollars. Although there isn't a formal category, “8 Seconds” is in the top grossing rodeo films of all time.

Luke Perry threw himself into the role of Lane Frost wholeheartedly. Perry trained with “The Guru”-1970 World Champion Bull Rider Gary Leffew and actually learned to ride bulls. A portion of the film was shot in the San Antonio area and many local rodeo hands were utilized in the production. After his portrayal of Lane Frost, Perry was a constant fixture at rodeo and western events supporting the sport and athletes with which he felt a kinship. Perry's commitment to the role and his post-role loyalty made him a favorite with the rodeo community.

On February 27, 2019 Perry suffered a massive stroke while at his home in Sherman Oaks, California. He died five days later, at 52 years of age, after his family made the decision to remove life support when it had been concluded that he would not recover.

Attorneys Danielle and Andy Mayoras wrote a piece for Forbes Magazine discussing some bullet points of Luke Perry's Estate Plan. I have attached a link below to take you to the article. Although Perry possessed an estate valued at approximately $10 million, the tools that utilized are available and affordable to all people and not just television and movie stars. Every responsible adult owes it to themselves and their families to make these simple moves to protect their families when the expected and unexpected events occur. I would be more than happy to consult with you to help make these plans. Please call me at 210.313.9839 to schedule an appointment.

Please click –>HERE<– to be re-directed to the Article: “Luke Perry Protected His Family With Estate Planning”

Thank you for contacting us. We will get back to you shortly.

Please complete all required fields below.

Matthew Myers, Attorney at Law, PLLC Is Here for You

At Matthew Myers, Attorney at Law, I focus on Estate Planning and Probate and I am here to listen to you and help you navigate the legal system.

Matthew Myers, Attorney at Law is committed to answering your questions about Estate Planning and Probate law issues in and around San Antonio.

I'll gladly discuss your case with you at your convenience. Contact me today to schedule an appointment.